Book: ‘Clepsydra and Other Poems’ by Camilo Pessanha – Editor’s Note 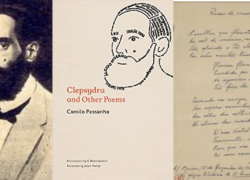 The only collection of poems to be published by the Portuguese writer Camilo Pessanha during his lifetime, Clepsydra is the crowning achievement of the Portuguese symbolist movement. Meditating on the inexorable flow of time, Pessanha sets the music of his verses against the murmuring water clock that gives the book its title. This new annotated translation by Adam Mahler recreates in English the haunting melodies and evocative dreamscapes that were widely admired and emulated by Portuguese modernists such as Fernando Pessoa. In addition to the thirty poems of the original 1920 publication, the bilingual volume features eighteen compositions that appeared in subsequent editions, making it the most comprehensive scholarly edition of Clepsydra to date.

Camilo Pessanha (1867―1926) was a Portuguese writer who spent much of his adult life in Macau, a Portuguese colonial enclave at the time. The author of an enigmatic body of symbolist poetry, Pessanha has secured a unique legacy within the colonial Portuguese literary tradition.

Adam Mahler is a doctoral student in Romance Languages and Literatures at Harvard University. The recipient of a Fulbright research grant, he has translated works from Santob de Carrión, Bernardim Ribeiro, Camilo Pessanha, and António Nobre. K. David Jackson is professor of Luso-Brazilian literature and culture at Yale University. He is the author of Adverse Genres in Fernando Pessoa.

Title: Clepsydra and Other Poems