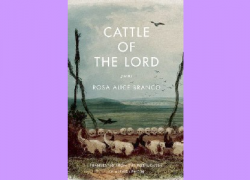 In a collection translated by Alexis Levitin and presented in both Portuguese and English, readers find themselves in a world turned upside down: darkly comic, sensual, and rife with contradiction. Here, liturgical words become lovers’ invitations. Cows moo at the heavens. And chickens are lessons on the resurrection.

Over the course of the collection, Branco’s unorthodox — even blasphemous — religious sensibility yields something ultimately hopeful: a belief that the physical, the quotidian, and the animalistic are holy, too. Writing at the boundaries of sense and mystification, combining sensuous lyrics and wit with theological interrogation, Branco breaks down what we think we know about religion, faith, and what it means to be human.

Rosa Alice Branco is the prizewinning author of Cattle of the Lord, translated by Alexis Levitin. She is one of today’s premier Portuguese-language poets, with over ten collections of poems translated and published around the world. The English translations of her work, developed in collaboration with renowned translator Alexis Levitin, have been featured in New European Poets and dozens of magazines and journals in the United States, including The New England Review, Prairie Schooner, and Words Without Borders. Branco has received the Espiral Maior Poetry Prize for Best Collection in Brazil, Portugal, Angola, and Galicia. Originally from Aveiro, she now lives in Porto, where she is a Professor of the Theory of Perception at the city’s Institute of Art and Design.

Alexis Levitin , SUNY Distinguished Professor, has translated over thirty books of Portuguese poetry and prose into English. His works include Clarice Lispector’s Soulstorm (short prose) and Eugénio de Andrade’s Forbidden Words (poetry), both published by New Directions. His most recent book is Salgado Maranhão’s Blood of the Sun (Milkweed Editions). He has received fellowships from the National Endowment for the Arts, the National Endowment for the Humanities, the Fulbright Commission, the Witter Bynner Foundation, the Gulbenkian Foundation, and Columbia University’s Translation Center, which awarded him the Fernando Pessoa Prize. As a translator, he has benefitted from residencies at the Banff International Translation Centre in Canada, the European Translators Collegium in Germany, and the Rockefeller Foundation’s Study and Conference Center at Bellagio, Italy. He has given readings and lectures on translation at well over one hundred colleges and universities in the USA, as well as institutions in Brazil, Portugal, Ecuador, the Czech Republic and France.