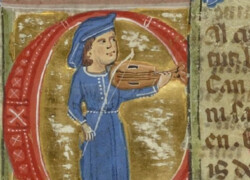 The rich tradition of troubadour poetry in western Iberia had all but vanished from history until the discovery of several ancient cancioneiros, or songbooks, in the nineteenth century. These compendiums revealed close to 1,700 songs, or cantigas, composed by around 150 troubadours from Galicia, Portugal, and Castile in the thirteenth and early fourteenth centuries. In Cantigas, award-winning translator Richard Zenith presents a delightful selection of 124 of these poems in English versions that preserve the musical quality of the originals, which are featured on facing pages. By turns romantic, spiritual, ironic, misogynist, and feminist, these lyrics paint a vibrant picture of their time and place, surprising us with attitudes and behaviors that are both alien and familiar.

The book includes the three major kinds of cantigas. While cantigas de amor (love poems in the voice of men) were largely inspired by the troubadour poetry of southern France, cantigas de amigo (love poems voiced by women) derived from a unique native oral tradition in which the narrator pines after her beloved, sings his praises, or mocks him. In turn, cantigas de escárnio are satiric, and sometimes outrageously obscene, lyrics whose targets include aristocrats, corrupt clergy, promiscuous women, and homosexuals.

Complete with an illuminating introduction on the history of the cantigas, their poetic characteristics, and the men who composed and performed them, this engaging volume is filled with exuberant and unexpected poems.

A bilingual volume that reveals an intriguing world of courtly love and satire in medieval Portugal and Spain.

“These cantigas, in Zenith’s hands, remind me that a poetry’s message is its music.”—Jesse Nathan, McSweeney’s

“Zenith helps provide a roadmap to appreciate some of the idiosyncratic aspects of the medieval language while also allowing himself the freedom to interpret the cantigas without a priority for overly literal translation. . . . Zenith’s phrasing conveys the love-sickness, anguish, jealousy, danger and fear that pulse through the original poems.”—Jacob Abell, Reading in Translation

“Cantigas opens a new vista onto a famous European poetic tradition. Richard Zenith’s introduction is a rich trove of history and insight, and his translations are revelations in terms of how deftly they capture the lyrical combination of verbal artistry and incantatory resonance.”―John Keene, translator of Hilda Hilst’s Letters from a Seducer

Richard Zenith, the author of Pessoa: A Biography, is a prolific translator of Portuguese and Brazilian poets and writers.

Series: The Lockert Library of Poetry in Translation