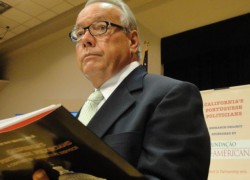 The book, California’s Portuguese Politicians: A Century of Legislative Service (2013), by historian Alvin Ray Grave, about the role of California’s politicians of Portuguese descent in American politics, was awarded second place by the 2014 International Latino Book Awards in the category of “Best History Book.”

The author thoughtfully introduces the reader to the pioneer Portuguese politicians from California’s San Joaquin Valley, by reflecting on their upbringing, their family lives, their civil service, their accomplishment and, for some, their pathway to Washington DC and the National Congress.

To gain insight into the awareness and commitment of a community toward its civic responsibilities, one must understand the social force that binds the members of such community to specific courses of action. To understand a community in such a way is to understand its key motivators, its very social fabric. This book is but one step towards a broader discussion and understanding of Portuguese-American politics in California.

California’s Portuguese Politicians is profusely illustrated to capture the civic and legislative contribution of the Portuguese immigrant community of California to State and National legislations. Published by the Portuguese Heritage Publications of California (PHPC) the book project was co-sponsored by Portugal-based Luso-American Development Foundation (FLAD).

Alvin Ray Graves was born in Perryton, Texas, in 1945. He completed his BA and MA degrees in Geography at CSU Fresno and received his Ph.D. in Geography from UCLA. He researched the Portuguese in California from 1969-1977, in preparation for his 1969 Master’s thesis “Azorean Portuguese:  Portuguese Dairymen in the San Joaquin Valley of California” and for his Ph.D. dissertation at UCLA “Immigrants in Agriculture: The Portuguese Californians, 1850-1970s.” Following the publication by Portuguese Heritage Publications of Portuguese Californians – Immigrants in Agriculture (2004) Dr. Graves once again unveils another fascinating aspect of the Portuguese immigrant experience, in this well researched book about California’s Portuguese Politicians; their ancestry and their path to positions of legislative prominence. 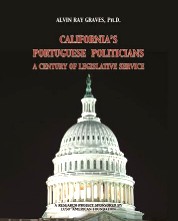