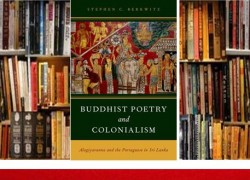 Stephen C. Berkwitz’s Buddhist Poetry and Colonialism examines five works by a single poet to demonstrate how Buddhism in Sri Lanka was shaped and transformed by encounters with Portuguese colonizers and missionaries in the sixteenth and seventeenth centuries. By following the written works of Alagiyavanna Mukaveti (1552-1625?) from the court of a powerful Sinhala king through the cultural upheavals of warfare and Christian missions and finally to his eventual conversion to Catholicism and employment under the Portuguese Crown, this book uses the poetry of a single author to reflect upon how Sinhala verse fashioned new visions of power and religious identity when many of the traditional Buddhist institutions were in retreat. Berkwitz traces the development of Alagiyavanna’s poetry as a medium for celebrating the fame of rulers, devotion to the Buddha and his Dharma, morality and truth in the Buddha’s religion, and the glories of Portuguese rule in Sri Lanka. Employing an interdisciplinary approach that combines Buddhist Studies, History, Literary Criticism, and Postcolonial Studies, the author constructs a picture of the effects of colonialism on Buddhist literature and culture at an early juncture in the history of the encounter between Asia and Europe.

Stephen C. Berkwitz is Professor of Religious Studies at Missouri State University and is the author of numerous books and articles on Sri Lankan Buddhism, including The History of the Buddha’s Relic Shrine: A Translation of the Sinhala Thupavamsa (Oxford University Press, 2007) and Buddhist History in the Vernacular: The Power of the Past in Medieval Sri Lanka (2004).