Book: Brazil at the Dawn of the 18th Century by André João Antonil – Editor’s Note 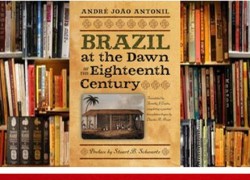 Tagus Press at UMass Dartmouth, in partnership with the University Press of New England (UPNE), has announced the publication of Brazil at the Dawn of the Eighteenth Century by André João Antonil, edited and translated by Charles R. Boxer, completing a partial translation begun by Charles R. Boxer, with a preface by Stuart B. Schwartz.

This is the first English translation of Antonil’s great work, which, according to historian Luiz Felipe de Alencastro (University of Paris-Sorbonne) is “essential to understanding the society and economy of colonial Brazil and stands as one of the most important works from the colonial period in the Americas.”

Brazil at the Dawn of the Eighteenth Century is the first volume of Lusophone History Classics in Translation published by Tagus Press at UMass Dartmouth, the publishing arm of the Center for Portuguese Studies and Culture. The new series is designed to make important publications from Portuguese widely available in English editions. The series intends to demonstrate the global range of Portuguese activities during the early modern and modern eras through publication and translation of the fundamental historical works produced at the time. The publication of Brazil at the Dawn of the Eighteenth Century was sponsored in part by the Brazilian Ministry of Culture/National Library Foundation.

André João Antonil (1649–1716) was an Italian Jesuit who lived in Brazil, mostly in Bahia, from 1681 until his death. Timothy J. Coates, professor of history at the College of Charleston, is the author of Convicts and Orphans: Forced and State-Sponsored Colonization in the Portuguese Empire, 1550–1755. Stuart B. Schwartz, professor of history at Yale University, is one of the most distinguished historians of Brazil.

The John Carter Brown Library, an institution for advanced research in history and the humanities at Brown University, will host a book celebration and lecture by Professor Coates, with reception to follow, at 5:30pm on February 21 in the MacMillan Reading Room. The John Carter Brown Library has a copy of the first and rare edition of Antonil’s book from 1711 in its collection. The event is free and open to the public.