Book: ‘The Book of Disquiet: The Complete Edition’ – Editor’s Note 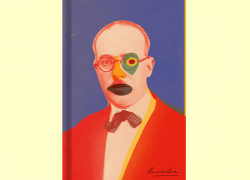 For the first time―and in the best translation ever―the complete Book of Disquiet, a masterpiece beyond comparison
The Book of Disquiet is the Portuguese modernist master Fernando Pessoa’s greatest literary achievement. An “autobiography” or “diary” containing exquisite melancholy observations, aphorisms, and ruminations, this classic work grapples with all the eternal questions.

Now, for the first time the texts are presented chronologically, including over 150 pages that have never appeared in any previous English edition. Most of the texts in The Book of Disquiet are written under the semi-heteronym Bernardo Soares, an assistant bookkeeper. This existential masterpiece was first published in Portuguese in 1982, forty-seven years after Pessoa’s death. A monumental literary event, this exciting, new, complete edition spans Fernando Pessoa’s entire writing life.

Fernando António Nogueira Pessoa was a poet and writer.
It is sometimes said that the four greatest Portuguese poets of modern times are Fernando Pessoa. The statement is possible since Pessoa, whose name means ‘person’ in Portuguese, had three alter egos who wrote in styles completely different from his own. In fact Pessoa wrote under dozens of names, but Alberto Caeiro, Ricardo Reis and Álvaro de Campos were – their creator claimed – full-fledged individuals who wrote things that he himself would never or could never write. He dubbed them ‘heteronyms’ rather than pseudonyms, since they were not false names but “other names”, belonging to distinct literary personalities. Not only were their styles different; they thought differently, they had different religious and political views, different aesthetic sensibilities, different social temperaments. And each produced a large body of poetry. Álvaro de Campos and Ricardo Reis also signed dozens of pages of prose. The critic Harold Bloom referred to him in the book The Western Canon as the most representative poet of the twentieth century, along with Pablo Neruda.

Jerónimo Pizarro is Professor at the Universidad de los Andes and holds the Camões Institute Chair of Portuguese Studies in Colombia. He has a PhD in Hispanic Literatures (Harvard University) and a PhD in Portuguese Linguistics (Universidade de Lisboa). He contributed seven volumes to the critical edition of Fernando Pessoa’s Works, published by the INCM. He is co-editor with Steffen Dix of Portuguese Modernisms in Literature and the Visual Arts ( Legenda, 2011). He won the Eduardo Lourenço Prize in 2013.