Book: ‘Being the Nação in the Eternal City’ – Editor’s Note 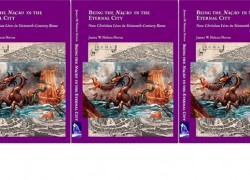 ‘Being the Nação in the Eternal City’, a new book by James William Nelson Novoa, explores in a set of case studies focusing on seven carefully chosen figures, the presence of Portuguese individuals of Jewish origin in Rome after the initial creation of a tribunal of the Portuguese Inquisition in 1531. The book delves into the varied ways in which the protagonists, representing a cross-section of Portuguese society, went about grappling with the complexities of a New Christian identity, and tracks them through their interactions with Roman society and its institutions. Some chose to flaunt Jewish origins. They espoused a sense of being part of a distinctive group, the Portuguese New Christian nação, that set them apart from other Portuguese. Others chose to blend as much as possible into the broader Iberian world represented at Rome, and avoided calling attention to their family past. All, however, had in their own way to work out the multiple shades of what was involved in being a Portuguese with Jewish roots needing to navigate the social and cultural pathways through Rome, the urban center of the Catholic Church. The book draws on archival research conducted in the Vatican, elsewhere in Italy, in Spain, and in Portugal. It brings a variety of sources to bear on the complex phenomenon of emergent group identities. It also proposes a critical reflexion on diasporas, the formation of sub-national communities, and on the structuring of collective memory in Early Modern Europe. The work will be useful to scholars and general readers interested in the Portuguese New Christian diaspora, in sixteenth century Rome, and in the dynamics of community consciousness in Early Modern Europe.

James W. Nelson Novoa is a historian whose research fields and expertise include the cultural legacy of Sephardic Jews, the Portuguese New Christian diaspora in the sixteenth and seventeenth centuries, Iberian and Italian cultural relations in the Early Modern period, the circulation of exotica among Portuguese merchants, and the cultural milieu of Iberian communities in Early Modern Rome. He has published widely, with various articles and book chapters to his credit and has presented lectures and papers at different international venues.