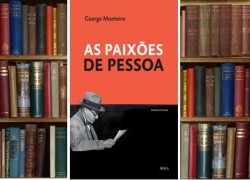 Launched in Lisbon, Portugal, the book As Paixões de Pessoa (Ática/Babel) is a selection of essays by George Monteiro, dedicated to the work of Fernando Pessoa. Translated into Portuguese by Margarida Vale de Gato, the essays appeared previously in English in various publications in the United States and abroad.

The author of many articles and books, Monteiro is a prominent American literature scholar, recognized for his work in the field of Portuguese and Brazilian letters, with a focus on border crossing inter-textualities concerning Anglo-American and Lusophone writers.

Monteiro has written extensively about Fernando Pessoa (1888-1935), a Portuguese poet and writer considered one of the greatest modernists in any language, and one of the world’s most fascinating literary figures. A contemporary of André Gide, Ezra Pound, Virginia Woolf, Franz Kafka, Gertrude Stein, Anna Akhmatova, Rainer Maria Rilke, T.S. Eliot, and William B.Yeats, Pessoa wrote in Portuguese and English under a number of heteronyms – imaginary literary alter egos – with individual identities complete with distinct biographies, occupations, lifestyles and dissimilar literary tastes and styles. 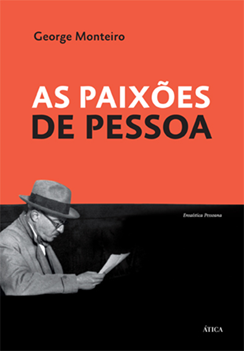 Monteiro begins As Paixões de Pessoa by discussing Pessoa as a public figure with literary aspirations. He discusses how and when, without much success, Pessoa introduced his most notable heteronyms Alberto Carneiro, Álvaro de Campos and Ricardo Reis, to the Portuguese literary scene, and how he failed many attempts to publish his English poetry abroad.

In prior writings, Monteiro has traced Pessoa’s influence on a wide range of contemporary English language writers, including Joyce Carol Oates, Allen Ginsberg, John Wain, Lawrence Ferlinghetti, and earlier twentieth century poets such as Thomas Merton, Edouard Roditi, and Roy Campbel. Monteiro has also established how Pessoa’s own work was influenced by his readings of numerous British and American authors.

In As Paixões de Pessoa,  Monteiro offers the Portuguese reader an overview of how in his formative years, Pessoa was greatly affected by the works of earlier British classical authors such as Edmond Spencer, Sir Philip Sidney, Sir Francis Bacon, John Milton, John Dryden and, above all, William Shakespeare, a poet young Pessoa hoped to emulate. Monteiro dedicates a chapter to an in-depth discussion of Pessoa’s affinities and indebtedness to Shakespeare, demonstrating how Shakespeare left a pervasive underlying influence in Pessoa’s heteronymic development.

In As Paixões de Pessoa Monteiro reveals to the Portuguese reader how Pessoa was influenced to a great extent by a number of nineteen-century American writers, namely Edgar Allan Poe, Nathaniel Hawthorne and Walt Whitman, a poet Pessoa greatly admired and often referred to as “mestre” [master].   For example, Pessoa translated “The Raven” and a number of other of Poe’s poems into Portuguese and, as Monteiro claims, Pessoa not only emulated Poe’s style, but he schooled himself in Poe’s analytical poetics. Monteiro writes, “Indeed, it can be safely said that Poe was one of those literary influences that manifested itself in Pessoa’s poetry and prose as well as in his remarkable two-time courtship and two-time dismissal of Ophélia Queiroz – this last, a doomed love story.” In fact, Poe’s essay, “The Philosophy of Composition,” served Pessoa, “not primarily as a source of metaphors, images, single words and phrases but in the deeper ways of thematic and structural indebtedness or influence. I shall also hint at the strange way in which Pessoa, as lover, emulated Poe’s life in aspect and detail,” Monteiro writes.

Born on June 13, 1888, Fernando Pessoa died at age 47, leaving behind only one published book – Mensagem (1942) – and some 25,000 unpublished text and fragments. Lying in his death bed, unaware of the effect his work would have, Pessoa’s wrote in English his last words: “I know not what tomorrow will bring.”   One of the world’s most researched and translated literary figures of the 20th century, Pessoa remains a mystery and perhaps one of the least understood masters of literature. Monteiro’s  As Paixões de Pessoa offers the Portuguese reader the magnitude and diversity of Pessoa’s work from a cross cultural perspective, across boundaries, with writers of the English language.

The book offers an extensive bibliography and numerous facsimiles of Pessoa’s original manuscripts and rare illustrations.

George Monteiro, professor emeritus of English and of Portuguese and Brazilian Studies at Brown University, is the author or editor of books on Henry James, Henry Adams, Robert Frost, Stephen Crane, Emily Dickinson, Fernando Pessoa, and Luis de Camões, among others. He served as Fulbright lecturer in American Literature in Brazil–São Paulo and Bahia–Ecuador and Argentina; and as Visiting Professor in UFMG in Belo Horizonte. In 2007 he served as Helio and Amelia Pedroso / Luso-American Foundation Professor of Portuguese, University of Massachusetts Dartmouth. Among his recent books are Stephen Crane’s Blue Badge of Courage, Fernando Pessoa and Nineteenth-Century Anglo-American Literature, The Presence of Pessoa, The Presence of Camões, Conversations with Elizabeth Bishop, Critical Essays on Ernest Hemingway’s A Farewell to Arms, Fernando Pessoa and Nineteen-Century Anglo-American Literature and Elizabeth Bishop in Brazil and After: A poetic Career Transformed. Among his translations are Iberian Poems by Miguel Torga, A Man Smiles at Death with Half a Face by José Rodrigues Miguéis, Self-Analysis and Thirty Other Poems by Fernando Pessoa, and In Crete, with the Minotaur, and Other Poems by Jorge de Sena. He has also published two collections of poems, The Coffee Exchange and Double Weaver’s Knot.   More…