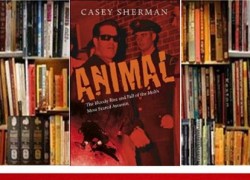 Joe Barboza knew that there were two requirements for getting inducted into the Mafia. You had to be Sicilian. And you had to commit a contract killing. The New Bedford-born mobster was a proud Portuguese, not Sicilian, but his dream to be part of La Cosa Nostra proved so strong that he thought he could create a loophole. If he killed enough men, if he did enough of the Mafia’s dirtiest biddings, then they would have no choice but to make him a Made Man.

Barboza’s brutal rise during one of the deadliest mob wars in U.S. history became the stuff of legend, both on the bloodied streets of Boston and in the offices of the FBI and the U.S. Attorney General. He took sick joy in his crimes, and it became increasingly difficult for the mob to keep the Animal on his leash. But soon the hunter became the hunted. Betrayed by the mob and now on the run, Boston’s most notorious contract killer forged a Faustian bargain with two unscrupulous FBI agents–a pact that would transform the U.S. criminal justice system. From false testimony and manipulated evidence that sent mob leaders to death row, to the creation of the Witness Protection Program so the feds could protect their prized, cold-blooded witness, this was the horrific, dramatic first act in a story of murder and FBI corruption still being played out today in the news and the courtroom with the capture and trial of Whitey Bulger. Barboza’s legacy, buried for years thanks to the murders or deaths of its participants, is finally coming to light and being told in its unvarnished brutality by one of America’s most respected true crime writers.

Casey Sherman is a Boston-based journalist and the author of A Rose for Mary: The Hunt for the Real Boston Strangler and Bad Blood: Freedom and Death in the White Mountains, among others. He is the coauthor of The Finest Hours: The True Story of the Coast Guard’s Most Daring Rescue.