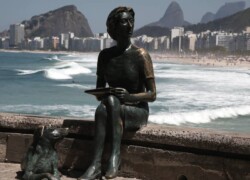 A love story by the great Clarice Lispector that asks: Just how might two people be joined?

What to make of a writer who follows the metaphysical heights of her great Passion According to GH with a book that looks suspiciously like a romance novel?

In An Apprenticeship or The Book of Pleasures, Clarice Lispector tries to discover how to bridge the gap between people, or how to even begin to try.

A woman struggles to emerge from solitude and sadness into love, including sexual love: her guide on this journey is Ulisses, who (yes) leads her patiently into the fullness of life. An Apprenticeship was a bestseller and, as her biographer Benjamin Moser writes, “This accessible love story surprised many readers. When it came out, an interviewer said: ‘I thought The Book of Pleasures was much easier to read than any of your other books. Do you think there’s any basis for that?’ Clarice answered: ‘There is. I humanized myself, the book reflects that.’”

“In An Apprenticeship, Lóri performs a sort of gonzo-philosophy, putting her body in service of an internal monologue in which she struggles to understand herself, her writing, and sexual desire as a whole.”― Los Angeles Review of Books

“This deep immersion into the vicissitudes of love will delight Lispector devotees.”

“A genius on the level of Nabokov.” ― Jeff Vandermeer, Slate

“The revival of the hypnotic Clarice Lispector has been one of the true literary events of the 21st century.” ― Parul Sehgal, The New York Times

“Lispector had an ability to write as though no one had ever written before. One of the hidden geniuses of the twentieth century, in the same league as Flann O’Brien, Borges, and Pessoa―utterly original and brilliant, haunting, and disturbing.” ― Colm Tóibín

Clarice Lispector was born in 1920 to a Jewish family in western Ukraine. As a result of the anti-Semitic violence they endured, the family fled to Brazil in 1922, and Clarice Lispector grew up in Recife. Following the death of her mother when Clarice was nine, she moved to Rio de Janeiro with her father and two sisters, and she went on to study law. With her husband, who worked for the foreign service, she lived in Italy, Switzerland, England, and the United States, until they separated and she returned to Rio in 1959; she died there in 1977. Since her death, Clarice Lispector has earned universal recognition as Brazil’s greatest modern writer.

Benjamin Moser, the author of Why This World: A Biography of Clarice Lispector, is the editor of ND’s Clarice Lispector translation series, of which this is the ninth volume. For Sontag: Her Life and Work, he won the Pulitzer Prize.