Book: Alda Petitti’s journey in quest for the meaning of life – Review 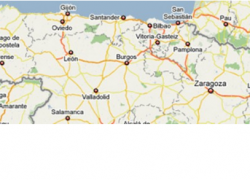 ♦ Born on Faial island, in the Azores, Alda Petitti moved to the United States at the age of eight with her parents and sister. At age 57, her book Camino Português: A Pilgrims’s Journey tells of her 10-day-150-mile-pilgrimage from Porto (Portugal) to Santiago de Compostela (Spain).

The call came about ten years ago when Alda started feeling she needed a change from her day to day routine. She wanted to take control over her life and, even if for a limited period of time, she wished to free herself from the world and her responsibilities as a tax accountant.

The decision came after she read a couple of books on the Santiago pilgrimage and felt certain that taking Camino Português was the adventure she wanted to experience. “I was fascinated with the idea of stuffing my belongings into a backpack and walking into the sunset with a map in hand and no schedule,” she writes in her book.

Santiago de Compostela is a city in Galicia, northwestern Spain. Santiago’s name and fame both derive from Saint James the Apostle (Saint Iago), whose holy relics are believed to be enshrined under the altar of Santiago’s magnificent medieval cathedral. 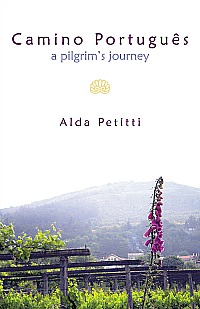 Camino Português is the 150 mile network of ancient pilgrim routes stretching across northern Portugal, through northwestern Spain. Besides Camino Português, to get to Santiago there is also the Camino Francés and the Camino Inglés.

Most pilgrims set out on the Camino(s) for spiritual reasons. Yet some will find spiritual reasons along the way as they meet other pilgrims. For Alda, her journey was a personal quest for self-discovery. She chose to begin her journey alone and finish it alone to discover who she truly is. In her gratitude journal, she writes:

People often ask me what I discovered from walking the Camino. To me the journey resembles life. I encountered challenges, met interesting people, and traveled through new places much like in life. The quietness and solitude of the Camino magnified my reactions to various situations. It was clear that I was learning lessons. They were not new, but after the Camino, they became meaningful and heartfelt experiences.

Being born in the Azores, Portugal, Alda felt familiar with the country, its language and culture. She felt safe. For the most part, she walked solo during the day. At the end of the day, she was joined by her husband, Ken.

Alda’s journey led her through many challenges as she faced the elements, the wilderness and the solitude of self-reliance. She writes:

Sheets of water cascade from the dark ink sky with loud rolling thunder bellowing. I am not afraid, just in awe. The water is rushing under my feet, as the trail fills up. After a while, I realize that this is not a passing thunder shower but a storm that is engulfing the mountain and decide to continue to the top before the trail becomes impassable. I navigate the rushing water by jumping from one large rock to another using my pole for support while struggling to keep my feet from getting wet. Wet feet means blisters. I reach the top in the pouring rain, holding an aluminum pole in my hand with rolling thunder overhead; yet, I feel safe and one with nature. My biggest fear of getting caught in a downpour has materialized, and I surrender to the storm.

Yet the longest journey is the journey inward. While walking she was taking a few moments each day to reflect and, as she was approaching her destination, she was gaining a deeper spiritual awareness into the meaning of life.

She finally stood at the door of the magnificent Santiago de Compostela Temple where, while inside, she waited in line for her peregrina certificate.

Before departing, she toured Santiago Cathedral for a couple of hours, alone, to say farewell and light candles, feeling grateful for the experience which made her a much changed person.

Yet, most of the spiritual illumination she experienced didn’t come at the end of her pilgrimage to Santiago de Compostela. It happened back at home where she felt safe and complete and where a new journey in inner wisdom had just begun. She writes:

We arrived home from Santiago, and after being home in the house for five minutes, I tripped on a mat and broke my ankle in three places. I was admitted to the hospital on Mother’s day, and a day later I was having surgery requiring pins and plates to hold the bones together. At first I was in disbelief that this had happened to me after completing the walk largely unscathed. But I had to remind myself that there is a reason for everything. Being in a cast and immobile for several weeks gave me plenty to of time to review my journal and photos from the trip, and I began to write about my journey.

Alda Petitti is a certified public accountant and a tax director with a national accounting firm. She is married to Ken, and they reside in Providence, RI. They have two daughters, Lauren and Margo. Alda is a Director in the company’s Tax Group. She joined the company in 1995. She has been in public accounting since 1979 and was one of the founding partners of Petitti, Eisenberg and Gamache prior to its merger with CBIZ Tofias. Alda specializes in providing business planning, accounting and tax consulting services to closely held businesses, partnerships and corporations. A graduate of University of Massachusetts at Dartmouth, BS and Bentley College, MST. She is an adjunct professor at Bryant University in Smithfield, RI. 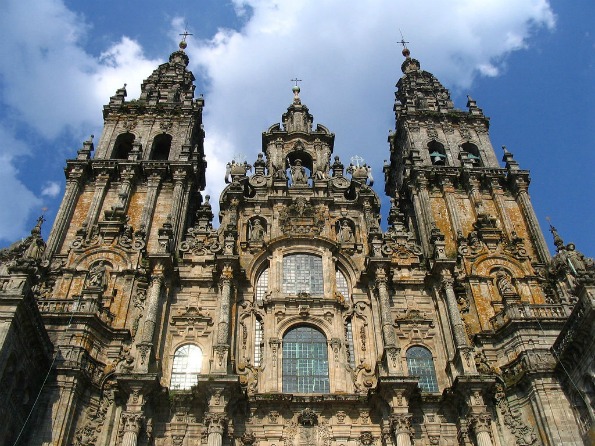