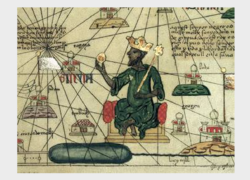 As early as 1441, and well before other European countries encountered Africa, small Portuguese and Spanish trading vessels were plying the coast of West Africa, where they conducted business with African kingdoms that possessed significant territory and power. In the process, Iberians developed an understanding of Africa’s political landscape in which they recognized specific sovereigns, plotted the extent and nature of their polities, and grouped subjects according to their ruler.

In African Kings and Black Slaves, Herman L. Bennett mines the historical archives of Europe and Africa to reinterpret the first century of sustained African-European interaction. These encounters were not simple economic transactions. Rather, according to Bennett, they involved clashing understandings of diplomacy, sovereignty, and politics. Bennett unearths the ways in which Africa’s kings required Iberian traders to participate in elaborate diplomatic rituals, establish treaties, and negotiate trade practices with autonomous territories. And he shows how Iberians based their interpretations of African sovereignty on medieval European political precepts grounded in Roman civil and canon law. In the eyes of Iberians, the extent to which Africa’s polities conformed to these norms played a significant role in determining who was, and who was not, a sovereign people—a judgment that shaped who could legitimately be enslaved.

Through an examination of early modern African-European encounters, African Kings and Black Slaves offers a reappraisal of the dominant depiction of these exchanges as being solely mediated through the slave trade and racial difference. By asking in what manner did Europeans and Africans configure sovereignty, polities, and subject status, Bennett offers a new depiction of the diasporic identities that had implications for slaves’ experiences in the Americas.

“At the core of Bennett’s book is the argument that the fierce competition between Portugal and Spain over the African Atlantic, which was significantly mediated by the Church, was crucial to the creation of the modern nation-state and of what became modern European nationalism. Early national identities in Europe were forged, to a substantial extent, on the basis of competition over trade and influence in Africa. And this, Bennett says, gets completely lost in Western histories that fast-forward from the conquest of the Canary Islands to Columbus’s arrival in the Americas.”—New York Review of Books

Herman L. Bennett is Professor of History at the Graduate Center of the City University of New York. He is author of Colonial Blackness: A History of Afro-Mexico and Africans in Colonial Mexico: Absolutism, Christianity and Afro-Creole Consciousness, 1570-1640.