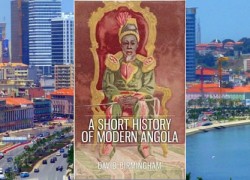 This history by celebrated Africanist David Birmingham begins in 1820 with the Portuguese attempt to create a third, African, empire after the virtual loss of Asia and America. In the nineteenth century the most valuable resource extracted from Angola was agricultural labor, first as privately owned slaves and later as conscript workers.

The colony was managed by a few marine officers, by several hundred white political convicts, and by a couple of thousand black Angolans who had adopted Portuguese language and culture. The hub was the harbor city of Luanda which grew in the twentieth century to be a dynamic metropolis of several million people. The export of labor was gradually replaced when an agrarian revolution enabled white Portuguese immigrants to drive black Angolan laborers to produce sugar cane, cotton, maize and above all coffee.

During the twentieth century Congo copper supplemented this wealth, by gem-quality diamonds, and by offshore oil. Although much of the countryside retained its dollar-a-day peasant economy, new wealth generated conflict which pitted white against black, north against south, coast against highland, American allies against Russian allies. The generation of warfare finally ended in 2002 when national reconstruction could begin on Portuguese colonial foundations.

David Birmingham‘s first book, on the Portuguese conquest of Angola, was published by Oxford University Press in 1965. Since then he has written a dozen other works, including the Cambridge History of Portugal, and edited the three-volume History of Central Africa, with Phyllis Martin. He taught in African universities and at the School of Oriental and African Studies, University of London, before being appointed to the chair of modern history at the University of Kent at Canterbury in England.