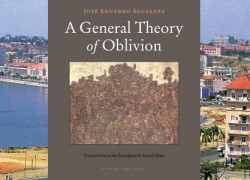 The main character in ‘A General Theory of Oblivion’ is an elderly lady real person, Ludovica Fernandes Mano, who at the start of the Angolan war shut herself in her apartment, writing on her walls in charcoal. She stayed there for twenty-eight years.

The outside world slowly seeps into Ludovoca’s life through snippets on the radio, voices from next door, glimpses of a man fleeing his pursuers and a note attached to a bird’s foot. Until one day she meets Sabalu, a young boy from the street who climbs up to her terrace.

She lives off vegetables and pigeons, burns her furniture and books to stay alive and keeps herself busy by writing her story on the walls of her home. She died in 2010.

Agualusa, considered one of the most relevant Portuguese-language writers of his generation, was asked to turn Ludovica’s story into a screenplay for a film. The project fell through, but the book that he produced carries with it the intricacy of a thriller plot.

José Eduardo Agualusa was born in Huambo, Angola, in 1960, and is one of the leading literary voices in Angola and the Portuguese-speaking world. His novel Creole was awarded the Portuguese Grand Prize for Literature, and The Book of Chameleons won the Independent Foreign Fiction Prize in 2007. His books have been translated into 25 languages. Four of his books have been translated into English: Creole (2002), The Book of Chameleons (2006), My father’s wives (2008), and Rainy Season (2009). He has received literary grants from the Centro Nacional da Cultura, the Fundação do Oriente, and the Deutscher Akademischer Austausch Dienst. Agualusa has also written four plays: W generation, O monólogo, Chovem amores na Rua do Matador and A Caixa Preta, the last two written with Mia Couto. Agualusa lives between Portugal, Angola and Brazil.

Daniel Hahn (born 26 November 1973) is a British writer, editor and translator. He is the author of a number of works of non-fiction, including the history book The Tower Menagerie, and one of the editors of The Ultimate Book Guide, a series of reading guides for children and teenagers, the first volume of which won the Blue Peter Book Award. Other titles include Happiness Is a Watermelon on Your Head (a picture-book for children), The Oxford Guide to Literary Britain and Ireland (a reference book), brief biographies of the poets Samuel Taylor Coleridge and Percy Bysshe Shelley, and a new edition of the Oxford Companion to Children’s Literature. His translation of The Book of Chameleons by José Eduardo Agualusa won the Independent Foreign Fiction Prize in 2007. He is also the translator of Pelé’s autobiography; and of work by novelists José Luís Peixoto, Philippe Claudel, María Dueñas, José Saramago, Eduardo Halfon, Gonçalo M. Tavares, Corsino Fortes and others.