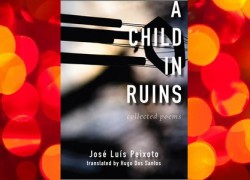 José Luís Peixoto is one of Portugal’s bestselling writers. Literature Nobel Prize, José Saramago, referred to him as “the most surprising revelation in recent Portuguese literature.”

The selection of the poems was made by the author with some suggestions by Hugo dos Santos, the translator.  A Child in Ruins was awarded the Award of the Portuguese Society of Authors for the best poetry book of that year. Gaveta de Papéis (2008) was awarded the Daniel Faria Award for poetry.

José Luis Peixoto was born in Ponte de Sor, a small village in the south interior region of Alentejo, Portugal. He has a degree in Modern English and German Literature in the Universidade Nova de Lisboa. Before devoting himself to writing professionally, he taught for a year in Praia, Cape Verde, and in several cities in Portugal. He has published poetry and fiction and received the Prize Jovens Criadores (Young Creators) in the years of 1997, 1998 and 2000. In 2001, his novel Nenhum Olhar (Blank Gaze/The Implacable Order of Things) received the José Saramago Literary Award. José Luis Peixoto is represented in a great number Portuguese and international anthologies and has collaborated in many international literary magazines. In 2003, in a totally unprecedented project, Peixoto joined forces with the Gothic metal band Moonspell and together they produced a book and record The Antidote. As far as drama is concerned, José Luís Peixoto wrote Anathema (premiered in Théâtre de la Bastille in Paris),  À Manhã (premiered in Teatro São Luiz, Lisbon) and Quando o Inverno Chegar (also in Teatro São Luiz, Lisbon). In 2007, The Piano Cemetery was distinguished with Spanish Calamo Literary Award for the best novel published in Spanish translation on the previous year. His first novel in English translation (Blank Gaze) was published in the UK in November 2007 by Bloomsbury and in September 2008 in the US (Nan A. Talese/Doubleday), under the title The Implacable Order of Things. His first title Morreste-me (You died on me) was published in the December 2010 issue of Warwick Review, published by the Warwick University in Coventry, England.

Hugo dos Santos was born in Lisbon, Portugal. At the age of 10, he moved to Newark, NJ (USA), his adopted home. He earned an MA in writing from Rutgers-Newark, and was recently a Disquiet International Scholarship winner. He is the author of the book ironbound – a blog, and is currently working on his first novel, Brick City. The Deepest Depths of Shallow Ponds is his second collection of poetry. He has performed readings at Yale University, UMass at Amherst, Rutgers University and at the Newark Library in support of Poetry Month in the city of Newark.