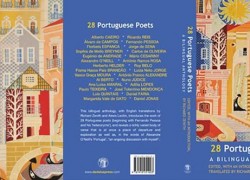 Edited and introduced by Richard Zenith, this bilingual anthology presents more than a century of Portuguese poetry, beginning with Pessoa and his heteronyms

Richard Zenith (b. 1956, Washington, D.C.) is an American-Portuguese writer and translator, winner of the Pessoa Award in 2012. His translations of Fernando Pessoa and of contemporary Portuguese poets in general are greatly admired and widely published.