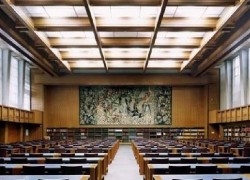 The National Library Research Fellowships, for at least a month and a maximum of two months, are intended for researchers from universities, study centers and similar departments and institutions – particularly libraries and archives – in the United States.

The BNP selects recipients on the basis of criteria that involve the project’s scientific merit, the extent to which the BNP’s collections are of interest to it, the originality of the proposal, and the guarantee that the persons concerned are fluent in the Portuguese language.

Manuscripts and other special collections (maps, prints, music, and literary archives) will be made available to researchers including accessibility for the visually impaired.

The National Library of Portugal (BNP) founded in 1796, holds over 3 million documents including rare collections of imprints and manuscripts, and unique collections of newspapers and serials.

The Luso-American Development Foundation (FLAD) is a grant making organization sponsoring initiatives to promote scientific and cultural exchanges between Portugal and the United States.