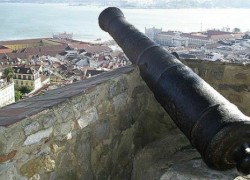 — Some readers might not be familiar with the historic expression “Biting the Bullet” from the American Far West, nor with the concept or thought behind it. As a matter of fact, its origin is not known, but it is believed that a wounded cowboy would bite on a bullet to help him endure the pain of a surgical operation as they were performed in those days without an anesthesia.

Such seems to be the need of Portugal today, in order “to endure a painful or otherwise unpleasant situation that is seen as unavoidable,” and also described as “to accept unpleasant consequences of one’s assured beliefs.” And there we are with “our finger in the wound” [nosso dedo na ferida].

My subject today is Portugal in an attempt to make it more understandable. It cannot be treated adequately without understanding its past. Some of the books available today in the bookshops were written in past centuries or under fascism, so they will have a certain slant and miss new information. Past regimes white-washed and “sanitized” the more unpleasant events that had occurred over the centuries. Taboos and vested interests had their way, and we have been presented with only one side of the coin. My purpose is to present a more rounded picture of the past to enlighten the present. But “What does this have to do with the current problems?”

Everything! I am in the habit of not “pulling my shots,” that is, letting it all hang out, and this has not been well received. I was attacked and insulted on a blog, in a think-tank, and in an international conference on teacher training and success, where I read and published an article entitled (in translation) “Formation, Deformation, Reformation, Transformation” [Formações, Deformações, Reformações e Transformações].

The leader of this section was the “dean” of teacher training in Portugal, at the time. He called my paper a “disaster.” Another young professor walked out of the session in the middle of the presentation, calling my approach “miserable” [miserabilista].

What have current writers, historians and critics said about Portugal today? To begin with, a distinguished Portuguese professor said in 1990 in his book on education: “In Portugal, intervention is always uncomfortable. Especially if one attempts to place truth above self-interest, fashion and fear.” A British literary critic recently entitled his article on the Portuguese literary scene in the Times Literary Supplement of London, “All in the Family.” He meant that the country is governed by a select and exclusive group of colleagues and friends. And then a Portuguese historian said, about a former colony, “We don’t merit you” [não te merecemos]. Already, as far back as 1730, a Swiss visitor had said the same think about the whole country.

So, how does this all relate to Portugal today, and just what is “the situation” in question? Well, it’s the crisis. What crisis? Which one? Which ones? What are the people saying just now in Portugal?

The crisis that comes from the enemies outside; from the stronger EU members; from the American banking and financial system – they say. From the “invasion” of inferior and cheap products from Spain and China; from the mega shopping centers [grandes superficies] that destroy local shops and production; from the “criminal” immigrants and prostitutes who come from the Ukraine, Rumania and Brazil, and the cheap Chinese shops that never close; from a corrupt and manipulated judicial system; from law firms that traffic in influences and do the government’s bidding; from an overburdened and taxed general public who feel exploited; from “jobs for the boys”; from jazzed-up accounting; from off-shores; from Swiss bank accounts.

Vat else is nu? as one might ask with a Woody Allen accent. Even hordes of stray dogs wander the streets abandoned and hungry.

I have collected here some of the main worries and preoccupations of the average man and woman, without exaggeration or bias of any kind. These very same worries and preoccupations appear in the press every day. They are treated with humor bordering on the ridiculous — an extremely low-brow approach — full of old and worn-out clichés. They momentarily divert the people from the situation they will wake up to in the morning. Television and radio devote prime-time to football (soccer) games, results and commentary, the weather and traffic reports , domestic violence, car accidents, ATM bombings, and how the rating agencies “unfairly” classify Portuguese Bonds as “junk” [lixo].

The people are extremely upset with banking practices and privileges, and public figures caught in flagrante delicto, and who never seem to end up in jail. That’s what the people are talking about. But the crisis to-end-all-crises is the one involving the Casa Pia (the public orphanage), where systematic sexual abuse crimes of exploitation of orphan children are still to be resolved and punished.

This is not a pretty picture, made by an intruder [intruso]. I have actually been called by that name and was told, “Why don’t you go back to where you came from?”

I am deeply patriotic in this country where I am an American-Portuguese resident-citizen. I request that my readers “consider carefully my ideas and forget my origin.”

The problem still is that Portugal is far from having completely assimilated, since the April Revolution of 1974, the spirit and practice of the democratic principles contained in the various Constitutions, and is also still quite removed from the practice of a Meritocracy. Therefore, the country is not showing itself able to realize its full potential, with open and transparent dealings among its citizens, and the promotion of talent rather than promotions because of a family name or other connections [cunhas]. This has caused an enormous number of people, poor and privileged, to emigrate in search of employment or to remain wasted and abandoned.

As I have stated previously, how we have come to this state of affairs has a history. In future articles, I will expand on my ideas, in an attempt thus to round out this initial account, in the name of fairness and balance. This at the price of dismantling some taboos, facing the facts and possibly causing upset.

John Howard Wolf, an American expatriate in Portugal since 1977, is a contributor to the Portuguese American Journal