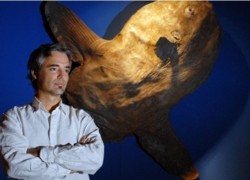 Miguel Bastos Araújo, a visiting research professor at the University of Évora, Portugal, has been selected by the International Biogeography Society (IBS) to receive the 2013 MacArthur and Wilson Award that recognizes an early-research individual for a notable, innovative contribution to biogeography. The award will be presented at the society’s biennal meeting in Miami, Florida, in January 2013.

Miguel Bastos Araújo was nominated independently by two groups of IBS members for his work on the impacts of global environmental change on species distributions and for his contribution to the conservation science literature. The Board of Directors of the International Biogeography Society thanks the work of the award committee: Pauline Ladiges, Christine Maggs, Albert Phillimore, Robert E. Ricklefs, Brett R. Riddle, and Robert J. Whittaker (chair).

Araújo is an internationally recognized leader in the study of environmental change impacts on biodiversity. He specialized in the use of ecological niche models for studying species distributional dynamics at a range of spatial and temporal scales. Specifically, he pioneered the use of ensemble forecasting in ecology as well coupled-models that incorporate population dynamics and environmental change pressures on estimates of extinctions risk. His work in conservation science was also influential, namely with regards to the use of models in systematic conservation planning protocols for selecting priority areas for biodiversity.

Araújo’s previous awards include the shared Nobel peace prize for his contributions to the IV IPCC report (2007) on climate change, and the ‘Rui Nabeiro/Delta’ Biodiversity Chair to promote higher education and high-level research in biodiversity and global change. According to Essential Science Indicators of ISI (Institute for Scientific Information), he also ranks among the top-10 most highly cited scientists in the field of ecology/environment in the past 10 years.

Araújo authored over 140 publications in internationally refereed journals and books and his work has been cited  over 11,600 times. Several of his studies were published in journals such as Nature, Science, PNAS, Trends in Ecology and Evolution, PLoS Biology, Proceedings of the Royal Society, Ecology, and Ecology Letters. He is author and co-author of several books, namely the Princeton University Press Monograph in Population Biology ,Ecological Niches and Geographical Distributions (2011).

Miguel Araújo serves as Deputy Editor-in-Chief of Ecography and associate editor of the Journal of Biogeography, and is member of the scientific committee of DIVERSITAS’ bioDISCOVERY programe created to improve understanding and predictions of biodiversity change. He also served in several professional committees and panels, including the CSIC Scientific Advisory Board to the Spanish Government on issues related to the IPBES (International Platform on Biodiversity and Ecosystem Services) and provided consultancy to the Spanish and Portuguese Environmental Ministries on issues related to climate change and biodiversity, and to the Council of Europe on climate change and European protected areas.

Before joining the CSIC (2006), Araújo worked as postdoctoral researcher at the French CNRS (2001-2003), as a Marie Curie research fellow at the University of Oxford (2004.2005), and as an Associate Professor at the University of Copenhagen (2006). In 2000, he earned a doctoral degree in Geography jointly held at the University College London and the Natural History Museum.

Via University of Évora