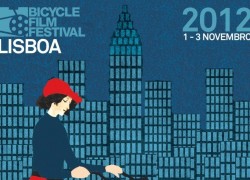 Lisbon is hosting, for the fourth time, the international Bicycle Film Festival (BFF), taking place November 1-3. The festival brings together all aspects of bicycling, celebrating the bicycle through art, film, music and performance.

In Lisbon, the BFF will screen 28 movies from 16 countries. The films will feature established artists to emerging filmmakers who have a shared passion for bicycles, namely  “Bikes, Bread and Wine: L’eroica“, by Italian director Morgan Bertacca, “Line of Sight“, bys US director Benny Zenga , and the documentary “Ras Tailteann Men of The Ras” by Irish director Sean O Cualain.

On November 2 and 3, an international bicycle rally will take place in Lisbon with the participation of cyclists from Portugal, Spain and Italy.

For the last 12 years, the BFF has traveled to different cities and countries, dedicated to the young, trendsetting city-dwellers who love and identify with film, art, music and sports. The goal is to promote a healthy lifestyle using an ecologically sound form of transportation.

Established in 2001, the BFF has previously travelled to 36 cities in the past, including Paris, New York, Tokyo and Sydney with over 225 thousand participants.

Headquartered in New York City, the Bicycle Film Festival  is an independent film festival that takes place annually around the world.