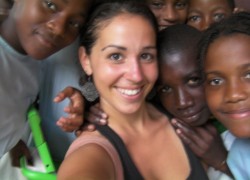 By Carolina Matos, Editor — Beth Santos, 25 years old, was born in Hartford, CT, from Portuguese immigrant parents originally from Ribatejo, mainland Portugal. Although most of her family still lives in Hartford, she grew up in Durham, NH, where she graduated from Oyster River High School in 2004. In 2008, she graduated from Wellesley College, MA, with a degree in Art History, Cinema and Media Studies. While still in college, she studied abroad for a year at the University of Coimbra, in Portugal, where she connected with her family in the small town of Cortiçal, near Alcanena. 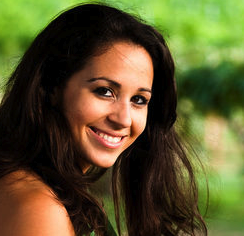 Beth was still looking for work two years out of college when she found her calling working as a volunteer in the former Portuguese colony of São Tomé and Príncipe, a small two-island nation off the coast of Gabon, West Africa. With a Portuguese-speaking population of roughly 160 thousand people, São Tomé and Príncipe is one third the size of Rhode Island. The country gained independence from Portugal in 1975.

The circumstances that led her there are familiar to many young, talented graduates caught in the downturn of today’s economy. Beth told the Portuguese American Journal (PAJ), “I had been hit pretty badly by the poor economy and was still hunting for a job. I met a friend of a friend, named Ned, at a picnic when I was living in DC. He runs a non-profit organization called STeP UP (São Tomé e Príncipe União para a Promoção) in São Tomé, having been the director of the Peace Corps there back in the ’90s. I volunteered with him at his organization.” STeP UP is a non-governmental organization formally known as São Tomé and Príncipe Union for Promotion.

Beth was sent to São Tomé city, the capital of the country, to work for two months at the São João Secondary School with 1,300 students. Her job was to teach computer skills to teachers and students using computers donated by MIT’s non-profit group — One Laptop Per Child — based in Cambridge, MA. The program works to bring technology into the hands of disadvantaged children worldwide. Each computer is personalized for the specific child using it, and is meant to be brought home and shared with family and friends.

Working in São Tomé was definitely an interesting experience for Beth. She told PAJ, “I found 100 laptop computers boxed away in the director’s office at the local secondary school. The faculty was too afraid of what could happen if they took the computers out of the locked office. I convinced them to start offering the kids computer classes, and they have been doing that for 100 of their 612 sixth grade students for two years now. We’re very proud of the program and looking to expand it.” 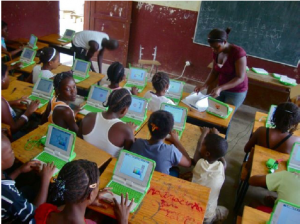 She began teaching her students on Saturday mornings. The problem was that there were 612 students and only 100 “XO Laptops” — as they are called. By the time her stay was over, she had already committed herself to getting more computers for the students at São João school. Back in the United States, for the last two years, Beth has been committed to raising the funds needed to buy the extra 500 laptops. The computers cost about US$250 USD each. She said, “That’s about $150,000 USD when you add in all the extra costs.”

Although help is coming in very small increments, Beth is very happy with some new developments. She reported to PAJ, “I’m still involved in the project. The Embassy of Taiwan has offered funding to grow the program to five more schools in São Tomé, complete with setting up an Internet connection, hiring local coordinators.”

The problem for Beth is that she needs funding to get there to coordinate this donation with the local Ministry of Education. She said, “It has become a big issue for me to find a $2,000 USD round-trip plane ticket to work out the final details of this program. Many grants and funding opportunities don’t fund travel, and that’s really our final step in achieving this great possibility.”

Santos also explained that although the Embassy of Taiwan has offered to grow the program through five different schools, she is still hoping to complete the program started at São João school so that all 612 sixth grade students will be able to use their computers in the classroom, rather than gathering for an extra class on Saturday morning. For this, Beth will also need another $150,000 USD.

Donations big and small are accepted and are tax-deductible. Beth has set up a website where donors can go for information and leave their donations. She said, “I would like to return as soon as possible so we can get talking with the Embassy and start coordinating the program, but I’m forced to wait until I can get about $2,200 in my direction to pay for a plane ticket! It’s very frustrating, but it’s reality.” 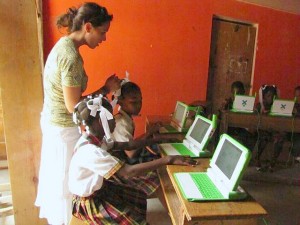 She told PAJ she has reached out to individual donors as well as donor institutions in the United States and abroad. She has even contacted the Portuguese Government. She said, “I’ve also been in touch with AICEP — Agência para o Investimento e Comércio Externo de Portugal — to see if we could use some of the Magalhães computers that have been used in Portugal and other Lusophone countries, but I haven’t been able to talk to the right people in the Portuguese Government. Perhaps a plane ticket to Portugal would also be useful.”

Beth, who is bilingual, has translated the computer’s user manual from English into Portuguese. She is glad she is fluent in Portuguese. She said, “I love speaking Portuguese. I feel so connected to my roots when I speak it. I think it’s a shame that the Portuguese language is shared by so few young Portuguese Americans, and that the greater Portuguese community doesn’t reach out more to young Portuguese Americans that don’t speak the language –though they may have interest in learning. Sometimes I feel that our community has a disconnect between the older and younger generations in many ways– the immigrants from the Azores in the ’50s and their grandchildren are experiencing life in very different ways.”

Beth is still looking for a full time job. In the meantime she also traveled to Haiti to work as a volunteer helping victims of the January 12, 2010, earthquake. About that experience she said, “I traveled to Haiti shortly after I got back from São Tomé. I returned from STP in December 2009 and was picked up by a non-profit organization called Waveplace Foundation that heard about the work I did in São Tomé and was hoping I could help them replicate it in Haiti. I spent six weeks there and returned for another two weeks this past February.” 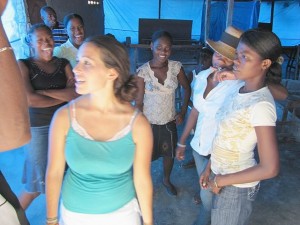 Working in São Tomé and Haiti were positive enriching experiences for Beth Santos. She found out that there is so much people like her can do to help others in need to build their lives and their communities. She said, “I am a strong believer in sustainability and don’t want something to die just because the American who came in is pursuing their next hot ‘voluntourism’ opportunity. I believe strongly in strengthening a local area so that projects that are begun can continue into the long term by local, dedicated people. One thing is for sure — I can’t possibly work in a field that I don’t believe in anymore. Doing something so meaningful has made me passionate about making the world better for our neighbors.”

Beth is certainly one of a kind. She believes that things happen for a reason. Back home in Chicago, IL — where she now lives — when she is not busy fundraising for her São Tomé project, she works as a volunteer for the National Organization of Portuguese Americans (NOPA), a national non-profit, non-partisan, tax-exempt organization created to advance the Portuguese-American community in the United States. She is also the founder and editor of “Go Girl Magazine,” a blog for independent women who travel.