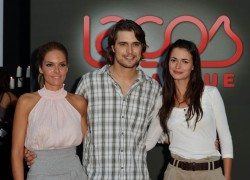 The other shows vying for the best telenovela Emmy were Contra las Cuerdas (Argentina, Destiny River (Brazil), and Imposter (Philippines)

Las year the winner was “Meu Amor”, also a Portuguese telenovela, produced by Plural Entertainment and run on TVI.

The ceremony kicked off with a surprise appearance by Lady Gaga. Forty nominees from a record 20 countries were competing in 10 categories for International Emmys at the ceremony hosted for the second straight year by former “Beverly Hills 90210” star Jason Priestley.

The awards are sponsored by the International Academy of Television Arts & Sciences, which includes media and entertainment figures from more than 50 countries and 500 companies.