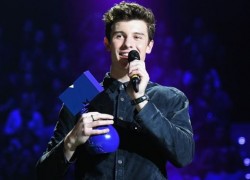 Big winners included Jared Leto whose band 30 Seconds To Mars took home the “Best Alternative” prize, while Irish rockers U2 were given the “Global Icon” honor and Eminem was named “Best Hip-Hop” artist.

Hosted by singer Rita Ora, the MTV/EMAs returned to London for the first time since 1996. The awards are held in a different European city each year, with winners selected by fans across the continent. Next year’s ceremony will be held in Bilbao, Spain.

Shawn Peter Raul Mendes was born and raised in Toronto, Ontario. His father, Manuel Mendes, is Portuguese (from the Algarve), and his mother, Karen, is English.