Berta Cabral candidate for President of the Regional Government – Azores 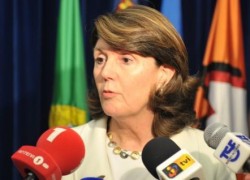 The Mayor of Ponta Delgada city, Berta Cabral, announced she is a candidate for President of the Regional Government of the Azores in 2012. She made the announcement Saturday, while addressing the Social Democratic Party regional convention held in Angra do Heroismo city, Terceira island.

Berta Cabral, 58, the leader of the Social Democrat Party (PSD) in the Azores, believes that, after the June 5 elections, the Azorean islands are ready for a change of direction. She said, “I am ready to lead the change that the Azores need and deserve.”

Carlos César, the incumbent President of the Regional Government of the Azores, is the leader of Socialist Party (PS) in the region. The social democrats defeated the socialists in the June 5 national elections, ousting former socialist Prime Minister José Socrates.

Berta Cabral criticized the administration of President Carlos César by saying that “the Azores are not being well governed.” She also said, “The Socialist Party has been in power for too long. The president of the government and the regional secretaries are always the same, clinging like limpets to power, as our people like to say.”

Carlos César, 55, was first elected President of the Regional Government of the Azores in 1996, after defeating the regional Social Democratic Party (PSD) led by former President Mota Amaral.

The Azores Islands became an autonomous region of Portugal in 1976. The region has its own government and autonomous legislature within its own political-administrative statute and organic law.

Its government includes the Legislative Assembly, composed of 52 elected deputies, elected by universal suffrage for a four-year term; the Regional Government and Presidency, with parliamentary legitimacy, composed of a President, a Vice-President and seven Regional Secretaries responsible for day-to-day executive operations.