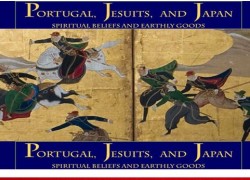 The McMullen Museum of Art at Boston College, MA, presents an exhibition displaying nanban trade art influenced by the arrival Portuguese missionaries and merchants in Japan, during the 16th and 17th centuries, the first Europeans known to have reached Japan in recorded history.

Titled, “Portugal, Jesuits, and Japan: Spiritual Beliefs and Earthly Goods” the exhibition will be on exclusive display, from February 16 through June 2, 2013.  On Monday, February 18, from 7 to 9:30 p.m., the public is invited to join Boston College community members at a free opening reception with a special evening viewing at the Museum.

The display examines cultural exchanges during this period, through the movement of goods on Portuguese ships that took over four years of travel roundtrip—from Portugal to Japan, with extended stopovers in India and China.  The viewer will travel through the complex landscape of religious ideas, customs, and artistic styles that typified the nanban period as an age of exploration.

“Boston College, one of the premier Jesuit universities in the world, is pleased to collaborate with the government of Portugal and Portuguese institutions on this groundbreaking exhibition examining—through the display of magnificent nanban works of art—the cultural, spiritual, and artistic exchange among Portuguese, Jesuits, and Japanese in the ‘Age of Exploration,’” said McMullen Museum Director and Professor of Art History, Nancy Netzer, in a press release announcement.

Examples of the objects depicted on the screens also will be on display: elaborately decorated Japanese furniture, lacquerware, and military equipment; Indian and Chinese ceramics, textiles, and furniture; and paintings by Jesuit-trained Japanese artists. In addition to rare European and Japanese maps, the artifacts and screens tell a fuller story than that documented in contemporary texts.

According to Consul General of Portugal in Boston, Paulo Cunha Alves, “Portugal, Jesuits, and Japan will be a one-of-a-kind exhibition in America. The beauty and the rareness of the works of art displayed, some of them coming from public and private collections in Portugal, will attract the attention of both scholars and admirers of Asian art. The exhibition explores the profound bonds between commerce and religion at the time of the first globalization promoted by merchants, missionaries, and noblemen at the service of the Portuguese Crown,” he said in a press release announcement.

The exhibition has been underwritten by Boston College, the Patrons of the McMullen Museum, Leslie and Peter Ciampi, the Camões Institute of Cooperation and Language/Ministry of Foreign Affairs of Portugal, the Consulate General of Portugal in Boston, and the Calouste Gulbenkian Foundation, with additional support from the Luso-American Development Foundation.