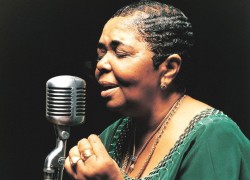 Cesária Évora, 70, died Saturday, December 17, on São Vicente island, in her native Cape Verde. Called the “Barefoot Diva,” because of her appearing on stage without shoes, Évora was the most popular singer of “morna,” a traditional music and dance from Cape Verde, often compared to the blues.

She had been ill for several months and had announced the end of her career last September when back home she said “Time to time, I need my homeland, my people and the swash of these waves.”

Cesária died from cardiorespiratory insufficiency and hypertension after being admitted at the Baptista de Sousa Hospital, on Friday, where she was kept in intensive care.

“During her moments of lucidity alternated with periods of unconsciousness she was always accompanied by her manager José da Silva,” said hospital director, Alcides Gonçalves.

Recently in Paris, Cesária had cancelled all her scheduled concerts for the year, for health reasons, after the physicians treating her advised her to cancel all performances to take care of her health. She was in the middle of a world tour, her first major performance since suffering a stroke in 2008.

Cesária Évora , nicknamed “Cize” by Cape Verdeans, was born August 27, 1941, in the city of Mindelo, St. Vincent island, to a family of musicians. Nominated for multiple Grammy awards, she won several gold records.  In 2004,  Voz d’Amor was awarded the Grammy Award (US) for “Best World Music Album.”  In France she was the recipient of the prestigious awards Victoire de la Musique and the Order of the Legion of Honor.

World renowned for her music, she was also known for her community charity activities in her own country where she sponsored many educational programs helping thousands of Cape Verdeans to learn to read and write.

Her first solo album Distino di belta was released in 1987, when she was 45 years old. Her songs were performed in the Creole dialect, accompanied by piano, ukulele, violin, accordion and clarinet. She had released a total of eleven albums from 1988 to 2009, under Lusafrica record label.

According to a family source, Cesária Évora’s funeral is scheduled for Tuesday, December 20.