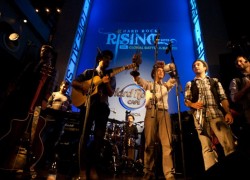 Based in Lisbon, the BWO started playing for money in the street, in September 2011, and soon realized they were a big attraction. The band grew is size and is now formed by eight musicians.

The 2012 Hard Rock International competition had more than 12,000 bands entering, with 841 bands competing live on Hard Rock stages around the world of which 10 became finalists after music enthusiasts cast their vote worldwide.

As the winner, the Brass Wires Orchestra will be flown to London to perform on the main stage at Hard Rock Calling 2012 scheduled to take place at the Hyde Park, in London, July 13-15.