BAM!!!: Emeril Lagasse recipient of the 2013 JBF Humanitarian of the Year – Award 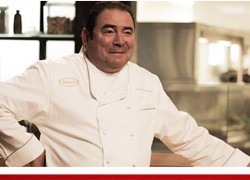 Portuguese-American celebrity Chef, Emeril Lagasse, is the recipient of the 2013 Humanitarian of the Year Award, by the James Beard Foundation, for his charity work.

The award is given to an individual or organization “whose work in the realm of food has improved the lives of others and benefited society at large,” says the announcement.

In 2002, Lagasse established the Emeril Lagasse Foundation, focusing within the communities where his restaurants operate by supporting nonprofit organizations and educational initiatives that create new opportunities for children, especially for those from disadvantaged circumstances.

Lagasse’s charity work ranges from the creation of fresh foods cafeterias to establishing culinary learning centers and has granted over $5.3 million to children’s education and culinary arts programs in New Orleans, Las Vegas, and the Gulf Coast.

“We are thrilled to announce that Emeril Lagasse has been selected as our 21013 Humanitarian of the Year,” said Susan Ungaro, president of the James Beard Foundation in a press release.

“Since Emeril entered the culinary scene more than 20 years ago, he’s become one of America’s best-known chef personalities,” said Unagro, adding, ‘but what truly sets Emeril apart is his passionate advocacy for youth. Through his own foundation, Emeril makes an incredible impact in communities where his restaurants operate by supporting key educational initiatives and culinary programs that creates opportunities for children in need.”

Chef Emeril Lagasse has hosted over 2,000 culinary shows on the Food Network, ABC’s Good Morning America and Martha Stewart Living show, among other venues. He is also the best-selling author of over 15 cooking books. He is also the chef and proprietor of many restaurants, including three in New Orleans, four in Las Vegas, two in Orlando, one in Miami, and one in Pennsylvania.

Emeril Lagasse, 54, was born in Fall River, Massachusetts, where he was raised by his French-Canadian father, Emeril Jr., and his Azorean descent Portuguese mother Hilda.

The James Beard Foundation Awards are the nation’s preeminent recognition program honoring professionals in the food and beverage industries. The Awards celebrate outstanding achievement in each of the following categories: Restaurants and Chefs, Books, Journalism, Restaurant Design and Graphics, Broadcast Media, and special achievement awards. The recipient of the Humanitarian of the Year Award is selected by the James Beard Foundation Awards Committee, which consists of the chairperson from each individual Awards program, members of the Foundation’s Board of Trustees, and members at large. Read more >>