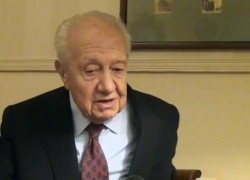 Former Portuguese President Mário Soares called on the opposition Socialists Tuesday to turn their back on the EU-IMF bailout austerity accord, saying the situation had changed, as the party’s leader announced he would relaunch an EU growth and jobs initiative in parliament.

Soares, the founder of the Portuguese Socialist Party, told newspaper “i” the party should renounce support for the bailout deal it signed while in government one year ago because the situation in the country and Europe had changed and austerity was not working.

“Everything has evolved: the accord with the troika, the troika, and the country”, he said in an interview.

“Almost all European leaders have understood that reducing the European Union to austerity and to financial equilibrium to favor usury markets and without taking account of the economic recession and devastating unemployment, which is growing, means that Europe is going from bad to worse”, Soares said.

The party he created negotiated and signed the Euro78 billion bailout deal with the European Commission, European Central Bank, and the IMF last May before being turned out of power in snap elections.

One of the founders of Portugal’s Socialist Party, Mário Soares, 88, served as Portugal’s Prime Minister from 1976 to 1978 and from 1983 to 1985. He was the 1st President of Portugal to be elected democratically in 1986. One of the most respected personalities of modern Portugal, he served two terms as President from 1986 to 1996. During his time in office he oversaw Portugal’s joining the European Union.