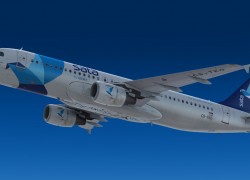 The Portuguese National Institute of Civil Aviation (INAC) has authorized the Azorean airline, SATA International, to fly to Brazil.

SATA International was given the right by to operate scheduled services from Lisbon to Salvador and Bahia starting this summer.

According to SATA International representative, José Gamboa, the airline is only waiting for clearance from the Brazilian civil aviation authorities to start offering the services.

SATA International is required to offer a minimum of 52 flights/year, to its new destinations in Brazil, to stay in the program.