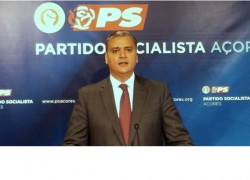 In a prepared statement to the press, on Sunday President Vasco Cordeiro, the head of the Regional Government of the Azores, said that holding early elections is the “only way to create, not just the possibility of a fresh solution leading to government stability but, and above all, to rebuild a new relationship of trust between the Portuguese people and their government.”

President Cordeiro was reacting to the political crisis resulting from the abrupt resignations, last week, of the Minister of Finance Vitor Gaspar and Paulo Portas the Minister of Foreign Affairs.  Portas, who is the head of the CDS-PP, the party in the coalition with the government, had said his decision to resign was irrevocable. Yet, over the weekend, Portas has since withdrawn his resignation under pressure from Prime Minister Passos Coelho. The move waits the approval by President Cavaco Silva.

Expressing his disappointment in the central government, President Cordeiro said it was a “sad display of irresponsibility, arrogance and contempt for the Portuguese people, the inability of the coalition PSD-CDS/PP to unite the country around a common purpose.”

“Only by giving voice to the people, we can offer a working stable, reliable solution which, truly, will build a new future for our country,” he concluded.

President Vasco Cordeiro, the leader of the Socialist Party (PS) in the Azores, was sworn Regional President of the Government of the Azores in 2012.

Last week, the President of Portugal, Cavaco Silva, met briefly with António José Seguro, the national leader of the opposition Socialist Party (PS). Following the meeting, Seguro told reporters he had asked the President to call early elections to give the country a “strong, cohesive, and coherent” government. He suggested that legislative elections be scheduled for September 29.

“It’s urgent to bring an end […] to this political crisis,” he said. The crisis, he added, “is setting back the heavy sacrifices the Portuguese people have already made.” The meeting took place at the Socialist Party’s request.

For Arménio Carlos, the leader of CGTP, the largest Portuguese trade union federation, “Portugal’s government is rapidly disintegrating before the public’s eyes.” He also called the President, last week, to dissolve parliament and call early elections.

Carlos said the President should “fulfill his constitutional duties by urgently interrupting Portugal’s drift towards economic and social ruin, by dismissing the government, dissolving parliament and calling early elections.”

The center-right government of Passos Coelho (PSD), in coalition with junior party CDS-PP, came to power in early elections June 2011, after the policies of the former Socialist government had failed and a bailout of 78 billion euros was requested from the IMF and EU to fund the national debt.