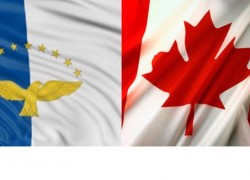 Paulo Teves, Regional Director of the Azorean Communities, is traveling to Ontario, Manitoba and Alberta, Canada, from May 10-13, to visit the resident Portuguese communities of Azorean descent and meet with local community leaders.

On May 12, Paulo Teves travels to Alberta where he will visit the Portuguese Society of Calgary and meet with members of the Azorean resident community in the Igreja Nossa Senhora de Fátima.

On May 13, Paulo Teves will travel to the city of Edmonton to meet with members of the Associação do Divino Espírito Santo de São Pedro, the Associação dos Pioneiros Portugueses of Edmonton and with a group of teachers of Portuguese at the Escola Portuguesa Gil Vincent, followed by a meeting with the local Azorean resident community in the Nossa Senhora de Fátima Parish of Edmonton.