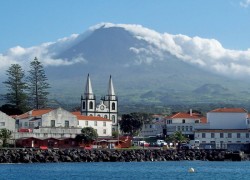 The Azores are a great deal for travelers. The December-January issue of Budget Travel magazine named the Azores number one on its list of 10 top world’s new best-value travel destinations for 2012, for its 500,000 readers.

The magazine featured the Azores on its cover and dedicated a full page to the nine islands. With their black-sand beaches, crater lakes, and baroque white washed 15th century churches the Azores, the text says: “This chain of nine volcanic islands lies 930 miles off the coast of Lisbon, but the distance hasn’t spared Azores, an autonomous region of Portugal, from the mainland’s economic troubles—which means big bargains for American travelers.”

The magazine highlighted the climate of the islands as being mild year-round and that the best time to visit is October through May when temperatures typically hit 70 degrees and daylight lasts 11 hours.

According to Budget Travel, the editors have combed through piles of data, news, currency charts, and industry trends to find their nominees for the world’s new best-value destinations before deciding which of the candidates will make the final list.

This year the Azores were distinguished as being one of eight “Exotic Warm-Weather Destinations to Try” by the US television station CBS; one of 10 “Best Trips of Summer” by National Geographic Traveler Magazine; and one of five “Volcanic Vacations” by the World Travel Guide.

The Village of Cuada, on Flores island, was considered one of the” World’s Most Romantic Hotels” by Travel and Leisure magazine which also considered the island of Pico as one of “Best Secret Islands on Earth.”