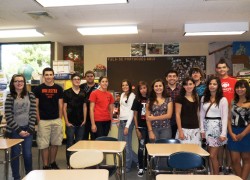 By Carolina Matos, Editor – They are only sixteen, but Ana Silva, Ana Silveira and Ines Amarante are having the experience of a lifetime. They are students at Escola Básica e Secundária das Velas, São Jorge Island, in the Azores, visiting the United States for the first time from September 23-27.

They were the winners of an award for participating in a contest organized by the Regional Office of the Azorean Communities (Direcção Regional das Comunidades/DRC) of the Regional Government of the Azores.

The contest held in the academic year of 2010, had the participation of all 10th and 11th grade students attending public and vocational schools in the Azores.

The theme for the contest was “Past and Present: Migrations in the Azores” a research project to explore the emigration and immigration experience on the islands.

The award included a field trip to Massachusetts for the winning team. The winners, who were 10th graders at the time of the contest, were accompanied on their trip by one of their teachers, Ana Bettencourt, and by Sónia Duque, a DRC representative.

Reflecting on her research project and field trip, Ana Silveira has learned that Azoreans that emigrate are very happy and well-adjusted in their country of immigration. She said “Before we did the research project, I thought that immigrants that left were always sad because they departed from their country. But we found out from our research that, although they miss their place of birth, they actually are happy and well-adjusted in their adoptive country.” 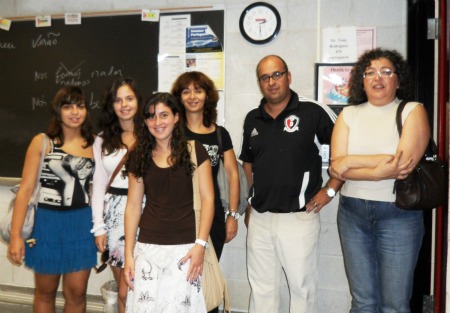 For Ana Silva, the team has learned that those who immigrate to São Jorge island, most of them from Brazil, are also happy and well-adjusted.   She said, “Before we did the research, I was not aware of how they felt being away from their country, living in the Azores. Now we know that they have adapted well to our way of life and that all of them are very happy living among us.”

Ines Amarante has learned about how big the United States really are. She said, “The idea I formed about the United States was from American films. I am really amazed with the size of everything. This is a country where distances are so big, the buildings are really tall, even the meals are oversized.” She also realized that there are many Portuguese speaking communities in Massachusetts. She said, “I was planning to practice a little bit of English, but so many people in Massachusetts speak Portuguese that I had no chance to practice. I met Portuguese speakers all over the place.”

For Ana Bettencourt, the team’s teacher, it is very important for Azorean students to travel outside to contact different cultures and to understand the implications of human mobility. She said, “We live in a global world, and students need to learn about emigration and immigration which implies both assimilation and discrimination. We are very pleased to find out that the Azorean community in the United States is well assimilated and is not discriminated.”

For DRC representative, Sónia Duque, the project fulfills the objectives of the Government of the Azores to make young people aware of the scope of the Azorean diaspora. She said, “Our aim is to have students from the diaspora and students in the Azores coming together to learn from each other and from the world around them. While we have thousands of Azoreans living outside the archipelago we also have immigrants in the Azores from 80 different nationalities. We think it is very important for the young generations to be aware of this reality.”

Educate the youth is among the most important priorities for the Government of the Azores. Last summer an Intercultural Summer Camp was held in the Azores to bring together around 30 high school boys and girls from Brazil, USA, Canada, Bermuda, Azores, Angola, Cape Verde, Germany, and other countries.

In a statement for the Portuguese American Journal, Dr. Graça Castanho, Director of the Regional Office for the Azorean Communities (DRC) said, “Besides these programs, DRC has many other projects geared to young people from our diaspora and for those who have immigrated here and now live on our islands with their parents. A project underway is “De Mãos Dadas com os Açores” which brings to the Azores young people from Azorean ancestry with disabilities. We are now organizing the first “Grandparents and Grandchildren” a new project aimed to bringing back to the islands the two generations in search of their heritage. We also have the “Dias de Melo Scholarship” for Azorean university students with financial need and “Cais da Cidadania” a program which, basically, is a boat that travels to all the nine islands offering activities and information for students to learn about the Azores.”