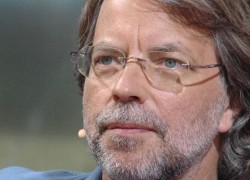 António Emílio Leite [Mia] Couto is the recipient of the 2014 Neustadt International Prize for Literature for lifetime achievement. Often called the “American Nobel,” the prize is awarded  for a lifetime body of work. The 58-year-old Mozambican author, a fiction writer and poet, will receive a cash prize of a $50,000.

The honor was announced Friday by the University of Oklahoma and World Literature Today, a magazine based at the school.

Couto is the first Mozambican author to win the Neustadt Prize. His books originally written in Portuguese, include the novels Sleepwalking Land; The Last Flight of the Flamingo;The Tuner of Silences; and a short story collection, Voices Made Night.

Considered to be one of the most important writers of Mozambique, his works have been translated in more than 20 languages. His novel Sleepwalking Land was named one of the 12 best African books of the 20th century by the Zimbabwe International Book Fair.

His novels have been awarded major literary prizes in Mozambique, Portugal, Brazil and Italy. He was the first African author to have received the Latin Union Award of Romance Languages and the prestigious 2013 Camões Prize for Literature (Brazil).Two of Couto’s novels have been made into feature films.