Alfredo Leitão won first prize, in the category of “Young Artist-Euphonium,” at the 2014 International Tuba Euphonium Conference (ITEC 2014) competition hosted by Indiana University’s Jacobs School of Music.  The competition features the world’s best in the field.

Alfredo Leitão, 18, is a student of euphonium at the Conservatório Nacional de Lisboa, Portugal, under professor Nuno dos Santos Fernandes.

Sponsored by the International Tuba Euphonium Association, the six day event, taking place from May 17 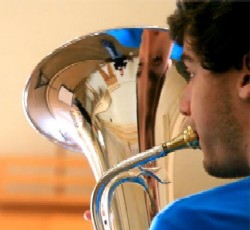 through May 24, is dedicated to tuba and euphonium players around the world. Gathering over 600 participants, the ITEC provides an opportunity to showcase great artists, student competitions, and the latest trends in music.

After 40 years, the 2014 International Tuba Euphonium Conference, which has been held across many countries, has returned to the Indiana University’s Jacobs School of Music, its place of origin, under the theme “Where It All Began”.

Officially founded in 1973, as the Tubists Universal Brotherhood Association, the International Tuba Euphonium Association is a worldwide organization of musicians whose purpose is to maintain a connection among those who take a significant interest in instruments of the tuba and euphonium family. The organization comprises performers, educators, students, and amateurs of all backgrounds.