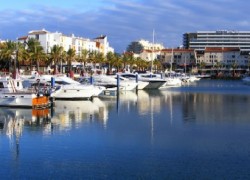 Vilamoura Marina, located in Algarve, southern Portugal, was named ‘Best International Marina’ for 2015 in an awards ceremony held in London.

The award was voted by international owners of visiting vessels throughout 2014. Marinas are sorted and ranked depending on the quality and versatility of the services they provide.

The classification is made of 1 to 5 Anchors (maximum level of excellence and quality). The Vilamoura Marina has a capacity to receive 825 vessels up to 60m long.

Vilamoura Marina has held, since many years, the ‘5 Anchors’ maximum score by The Yacht Harbour Association (TYHA) with the support of the British Marine Federation. From 2011 to 2014, consecutively, the Vilamoura Marina has also been awarded by “Publituris Trade Award’ for the ‘Best Portuguese Marina.’