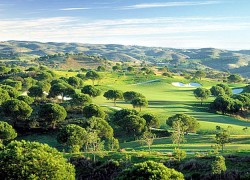 Portugal was named World’s Best Golf Destination at the World Golf Awards at a gala ceremony which took place over the weekend in Algarve, southern Portugal.

The World Golf Awards, recognizing excellence in the golf hospitality industry, was presented by the same organization that hosts the World Travel Awards, known as the “Oscars” of the travel industry.

With over 80 high standard golf courses, Portugal, including the Azores and Madeira, was awarded for its breathtaking golf resorts set against ocean views, dazzling scenery, dramatic cliffs, picturesque foothills, white sand dunes, lakes and mountains most popular among golf pros for major events including the European Tour.

Other big winners of the night included St Andrews Links (Old course), which, perhaps not surprisingly, took the title of world’s best golf course 2014, and The Els Club Teluk Datai, developed on the island of Langkawi off the northwest coast of mainland Malaysia, which was named the world’s best new golf course.

Established in 1993, the World Travel Awards honors and rewards excellence across all sectors of the tourism industry offering one of the most prestigious and comprehensive awards program in travel and tourism, recognized worldwide as the hallmark of industry excellence. The winners are determined by an online vote cast by hundreds of travel professionals and consumers around the world.