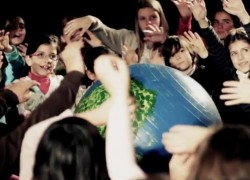 The choir won the contest with the performance of “Meu Planeta Azul” [My Blue Planet] with lyrics by Rita Fouto and music by Carlos Gutkin and Yara Gutkin. The Choir received 44,251 votes through the social media networks worldwide.  The winner choir will travel to Rio de Janeiro, Brazil, to attend the Rio+20 Earth Summit in June.

The Global Youth Music Contest is a global competition for young people, organized by the International Association for the Advancement of Innovative Approaches to Global Challenges (IAAI), on the occasion of the 20th anniversary of the United Nations Commission on Sustainable Development (Rio+20 Earth Summit) to be held in June 20-22 in Brazil.

The Oeiras Santo Amaro Childrens’ Choir was established in 1976 by its conductor César Batalha. In 1978, the choir released its first LP entitled “Uma Dúzia de Canções” [A dozen songs] which became a national hit. The choir has since grown in popularity performing nationally and internationally.

The town of Santo Amaro de Oeiras is a popular beach resort nearby Lisbon overlooking the mouth of the Tagus River. Its reputation was first established in the 19th century for its medicinal healing properties.