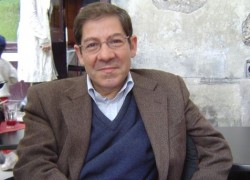 Considered the most prestigious literary prize in the Ibero-American world, the 42,100-euro ($55,700) cash award recognizes Judice’s complete body of work.

Spanish poet Jaime Siles, a member of the jury, said in a statement that the jury’s decidion recognized Júdice’s “very well-crafted, of a refined classicism […] deeply committed to reality.”

Nuno Júdice was born in 1949, in Mexilhoeira Grande, in the Algarve southern region of Portugal.  A prolific writer, he has published works including 32 poetry books, 16 volumes of fiction, 11 collections of essays, and five produced plays. His work has been translated into twelve different languages.

He directed the magazine Tabacaria of the Casa Fernando Pessoa, in Lisbon, in the nineties. Since 2009, he has been the editor of the literary magazine Colóquio-Letras, at the Calouste Gulbenkian Foundation

From 1997 to 2004, Júdice served as cultural attaché for Portugal in Paris. He has also served as director of the Instituto Camões in Paris during the same period of time.

Recently, Nuno Júdice was interviewed for the Portuguese American Journal, by Millicent Accardi. In the interview Júdice speaks of five decades of writing, his literary references and preferences, the state of the Portuguese letters at home and abroad, of his creative practice and his work in progress.