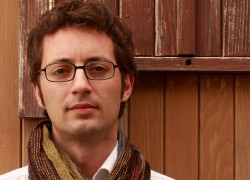 Portuguese author Nuno Camarneiro, 35, was awarded the 2012 LeYa Prize for his novel Debaixo de algum céu [Under some sky].  The literary prize is worth Euro100,000. More than 270 original works by Portuguese language authors entered the competition.

The annual prize, created to distinguish an unpublished work written in Portuguese, was established by the publishing group LeYa with more than a dozen publishing houses in Portugal, Angola, Mozambique and Brazil.  The awarded unpublished novel by Camarneiro will be available in March 2013.

Acording to the auhtor, the book addresses the idea of “purgatory.” The action takes place inside an apartment building where, during the week between Christmas and New Year, each tenant experiences a personal turmoil.

Established in 2008, the LeYa Prize is the largest literary award  for Portuguese language authors.