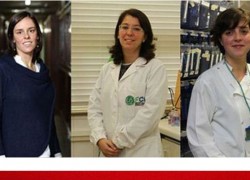 Three Portuguese researchers, Ana Abecassis, Ana Ribeiro and Leonor Morgado, have been awarded the 2012 L’Oréal Portugal Honour Medals for Women in Science for individual research projects in AIDS virus resistance to antiretroviral drugs, spinal cord regeneration and clean energy production. The prize is worth €20,000 each.

Ana Abecassis, 33, is a researcher at Nova University of Lisbon. She is studying HIV resistance to antiretroviral medicines and how the virus mutates making some strains resistant thus requiring more toxic and expensive treatments. About 8% of the HIV sufferers in Portugal have antiretroviral resistant strains of the disease.

Ana Ribeiro, 32, is a researcher at Lisbon University. She is researching how the zebra-fish can regenerate their spinal cord and how it is different from mammals. Her research findings may be useful for the development of new therapies or more efficient therapies for humans.

Leonor Morgado, 29, is a researcher Nova University of Lisbon. She is studying how a strain of the bacteria Geobacter sulfurreducen, found in mud and sediment, produces environmentally friendly electricity.

The L’Oréal Portugal Honour Medals for Women in Science is aimed at young researchers (under 35) who completed their doctoral studies and work in Portugal in the health and environmental areas.

Created in 2004, the L’Oreal Portugal Medal of Honor for Women in Science is the result of a partnership between L´Oreal Portugal, UNESCO National Foundation, and Fundação para a Ciência e a Tecnologia. This year, the juri selected three winners out of 70 submissions.

The L’Oréal-UNESCO Awards for Women in Science aims to improve the position of women in science by recognizing outstanding women researchers who have contributed to scientific progress. The awards are a result of a partnership between the French cosmetics company L’Oréal and the United Nations Educational, Scientific and Cultural Organization (UNESCO).

L’Oréal, the world’s leading beauty company for over 100 years, has built a portfolio of 27 international brands and employs 68,900 people worldwide.