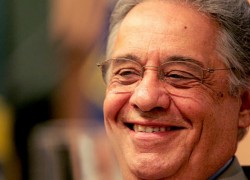 Brazilian former President, Fernando Henrique Cardoso, 80, a descendant of Portuguese immigrants, will be awarded the $1 million 2012 John W. Kluge Prize, by the Library of Congress, for a lifetime of intellectual achievement in the humanities and social sciences.

Cardoso, who had a distinguished international career as a scholar before twice being elected president of Brazil, will receive the award on July 10 in the Library’s Thomas Jefferson Building.

Trained as a sociologist, Cardoso is the author of over 100 scholarly articles and has publised more than 40 books, namely the seminal Dependency and Development in Latin America published in 1969.

Cited by the Library of Congress, Fernando Henrique Cardoso is “[…] one of the leading scholars and practitioners of political economy in recent Latin American history. His scholarly analysis of the social structures of government, the economy and race relations in Brazil laid the intellectual groundwork for his leadership as president in the transformation of Brazil from a military dictatorship with high inflation into a vibrant, more inclusive democracy with strong economic growth.”

Administered by the Kluge Center in the Library of Congress, the Kluge Prize was first given in 2003 and last granted in 2008. The prize is one of the highest honors recognizing achievements in the humanities and social sciences. Winners “must have earned unusual distinction within a given area, and their body of work must demonstrate growth in maturity and range over a sustained period of time and must affect perspectives and vision in other areas of study and walks of life.”

Founded in 1800, the Library of Congress  is the nation’s oldest federal cultural institution and the world’s largest library. Read more>>