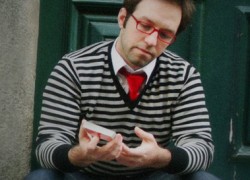 Helder Guimarães, 23, one of the best card magicians in the world, was named “Parlour Magician of the Year” at 44th Academy of Magical Arts Awards show taking place Sunday at the Saban Theatre in Hollywood.

Born in Porto, Portugal, and now based in the United States, Guimarães has won numerous international awards including the prestigious World Champion of Magic at the FISM convention in 2006. In 2004 he had won the Ascanio Prize and in 2002 was awarded 2nd Prize in Card Magic at the Spanish National Convention.

He has performed in more than 15 different countries including Japan, the United States, England, Argentina, Finland, South Korea, Switzerland, Brazil, Germany and the Netherlands.

Considered to be one of the leading world experts in sleight of hand magic, he travels around the world as an

instructor and consultant on magic for theater productions.

Helder Guimarães holds a university degree in Dramatic Arts from the Institute of Music and Dramatic Arts, in Porto, Portugal, where he studied comedy. The son of a magician, Guimarães gave his first magic show at the age of three in kindergarten. He is also the author of the book Reflejos, in Spanish, translated into English and of the DVD Small Miracles.