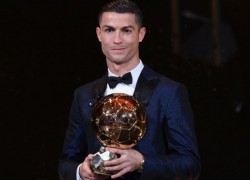 Cristiano Ronaldo has won for the fifth time the Ballon d’Or, matching rival Lionel Messi’s record of filth Ballon d’Or awards. Ronaldo had received the honor in 2008, 2013, 2014, and 2016.

The annual award is based on sports journalist voting and presented by the magazine France Football to the best soccer player of the year. The 2017 winner was announced on Thursday, December 7. The ceremony took place at the top of the Eiffel Tower, in Paris, France.

In its 62nd edition, the Ballon d’Or award  has been won by many different players, but no one had been as successful as Lionel Messi . The Barcelona star has won on five occasions, finishing in the top three a total of 10 times.

Cristiano Ronaldo (the favorite) and Lionel Messi, topped the list of 30 players nominated for the 2017 award. Reacting to winning the honor Ronald remarked: 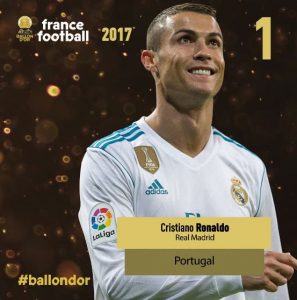 “I feel very happy, it’s a fantastic moment in my career, d I’ve been waiting for this for a long time.

“Trophies help win these awards and we have to thank my colleagues from Madrid and Portugal, it was very important for me.”

Cristiano Ronaldo, 32, a native of Madeira Island, is a Portuguese professional footballer who plays as forward for Spanish La Liga Club Real Madrid. The captain of the Portuguese national team, he has become the most expensive player in football history. In 2014, 2015, 2016 and 2017 Forbes magazine ranked him the world’s highest paid athlete, with yearly earnings of over $80 million in combined income from salaries, bonuses and off-field earnings.

He was named FIFA’s Best Men’s Player in August, he was named UEFA’s 2016-17 Best Player in Europe for a third time and last Wednesday he became the first player to score in each of the six group games in the UEFA Champions League while  helping Portugal qualify for the 2018 World Cup by scoring 15 goals. The third Portuguese international footballer to win the Ballon d’Or after Eusébio (1965) and Luís Figo (2000), he is the first Portuguese soccer player to win the Ballon d’Or award five times.

The Ballon d’Or (French for ‘Golden Ball’) is an annual individual award which is given to the footballer who performed the best during the previous year. The award was initially distinct from FIFA’s World Player of the Year award, but the two merged in 2010 to become the FIFA Ballon d’Or. However, that merger lasted just five years and the Ballon d’Or became separate from FIFA again in 2016. Among the others to have won the award are George Best , Zinedine Zidane , Michael Owen and George Weah , while Kaka , who won in 2007, was the last person outside of Messi and Ronaldo to scoop the prize.