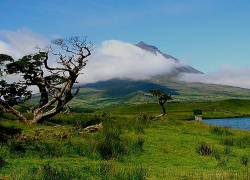 The Azores won the “Platinum Quality Coast 2014-2015” award as “Number One” sustainable destination.

Although this is the first time the “Platinum Quality Coast” award is being presented, the Azores emerged the winner of a Quality Coast Award for the second time in two years.

For the 2013-2014 season the archipelago had won the Quality Coast Gold Award and was named “Number One” sustainable tourism destination by Quality Coast.

Established in 2009, the Quality Coast awards are the largest certification program in the world. It identifies destinations that standout in regard to sustainable tourism and recognize efforts that contribute to maintain local identity, natural and cultural heritage, scenic beauty and clean environment.

The archipelago is also recognized for its natural heritage sites such as the UNESCO Biosphere Reserve and for Angra do Heroísmo city as a UNESCO World Heritage Site. The islands are also home to a rich marine ecosystem that is also protected. In 2013, UNESCO certified the archipelago as a European Geopark that offers well-regulated snorkeling, cycling trails, scuba-diving, 33 Blue Flag beaches, and hiking.