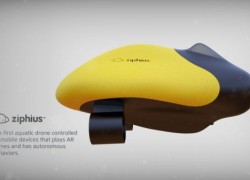 A team of Azorean inventors associated with Aquatic Technologies, based on São Miguel island, Azores, was the winner of the Grand Prize ($20,000) and the Audience Award ($5,000) for the underwater robot Ziphius.

The gadget was a contestant in the Insert Coin competition at the Engadget Expand conference held at the International Technology Fair, in San Francisco, USA.

A small size robot (drone), the Ziphius has a Raspberry Pi computer inside and an adjustable built-in up front video-camera controlled via a smartphone device (Android) or tablet (iOs).

The camera is adjustable, allowing the user to see what is happening under water. It also incorporates a focus LED that allows for a view under poor light conditions. The transmission between mobile devices and the drone is made by wi-fi with a range of around 90 meters in open spaces.

According to main developer, Cristina Gouveia, apps will be created to allow the Ziphius to act autonomously. The device, still in the prototype phase, will be available for sale next summer for around $200.

The Ziphius is the first prototype developed by the  Azorean Aquatic Technologies, based in Ponta Delgada , a spin-off of technology YDreams.

The Insert Coin competition aims to reward new ideas involving devices which are not produced by major manufacturers. Read more >>