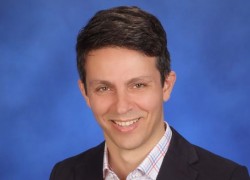 Lopes, who is studying for a doctorate in special education at Florida International University, is originally from Brazil.

“He performs magic in his classroom every day, sharing his wonderful skills with children with challenges, who benefit from the magic he brings to them,” said Alberto M. Carvalho, Superintendent of Miami-Dade County Public Schools.

The award comes with a $10,000 check from the Macy’s Foundation and a trip to New York for the Macy’s Thanksgiving Day Parade, among other prizes.

He was selected from more than 20,000 teachers from around Miami-Dade and from among 180,000 around the state of Florida for the honor. He leads a Learning Experience Alternative Program (LEAP), class for prekindergarten students.

Many of his students are autistic, cannot speak or use the restroom on their own. He uses music and dance to teach and communicate with them. The award is sponsored by Macy’s. Commissioner of Education Gerard Robinson was present to make the announcement. He goes on to compete for the national title.

Lopes, 43, succeed another South Florida teacher in the honor: Alvin Davis, who teaches music at Miramar High School, was the 2012 state teacher of the year.

of Education Teacher of the Year for 2013