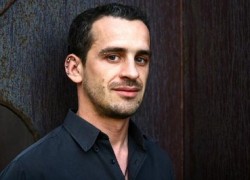 Portuguese author José Luís Peixoto will be visiting colleges and universities in the East Coast, November 2-9, on a lecture tour sponsored by Lisbon-based Instituto Camões.

At the University of Massachusetts Boston, José Luís Peixoto will be one of 20 Portuguese language writers featured at the exhibition “New Textualities in Portuguese Language” at the Healey Library, sponsored by the Center for Portuguese Language and Instituto Camões.

Born in 1974, in the southern region of Alentejo, mainland Portugal, José Luís Peixoto is one of Portugal’s most acclaimed, prize-winning young novelists. He is the author of many books of fiction, poetry and drama. He has been awarded several national and international prestigious literary prizes.

In 2001 he won the José Saramago Award, from Fundação Círculo de Leitores, and in 2007 he was distinguished with Spanish Calamo Literary Award for the best novel “The Piano Cemetery” published in Spanish translation. His works have been published in France, Italy, Greece, Bulgaria, Turkey, Finland, Netherlands, Spain (Spanish and Catalan), Czech Republic, Croatia, Belarus, Brazil, United States, United Kingdom and Hungary. His novels are translated in a total of 20 languages. The Municipality of Ponte de Sor, in mainland Portugal, has created a literary award for young authors on his name.

Created in 1992, Instituto Camões is a Lisbon-based Portuguese grant making institution dedicated to promoting the Portuguese language and culture worldwide. Sponsored by the Portuguese Government, under the Ministry of Foreign Affairs, the institute runs multiple centers in 24 countries, including the United States.